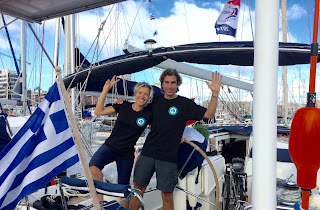 George grew up in Voula, a suberb of Athens and he always loved the sea. Sailing with his older brother Stelios, has been this deepest joy and a great school for him. At the age of 12 he started sailing with laser dinghies. At the age of 15 he obtained the offshore sailing license from HORC. In the following years he traveled with in the Greek seas, always making plans for long sailing trips to overseas destinations.
He studied marketing and management and worked for 25 years in the family business. At some point, seeing life from a different angle, he diverted his business into property in order to make time for sailing.

Karina grew up in Pireas, the largert port of Greece and spent the summers of her childhood in Aegina island by the sea. At the age of 15 she fell in love with her first sailing vessel, a windsurf.
At the age of 19 and for five years, she sailed around the Greek seas with a friend’s 29 ft sailboat.
In the island of Milos, she made the aquaintance of a french lady who, together with her husband, lived 20 years in their sailboat making the circumnavigation of the Earth.
Since then, she has been her role model and living on a boat and sailing around the world, has been her most precious dream. When she was 25 years old, she took the offshore sailing license. She studied computer science and finance in the Greek University without much enthusiasm. For many years she worked at the major Greek newspaper ETHNOS.
In 2001 George and Karina became a couple and soon they got married. In 2006 they bought Filizi. In May 2011 Karina quit her job to travel the world with Yorgos and Filizi.